The Americans…60 years after Frank – what it is and what it isn’t. 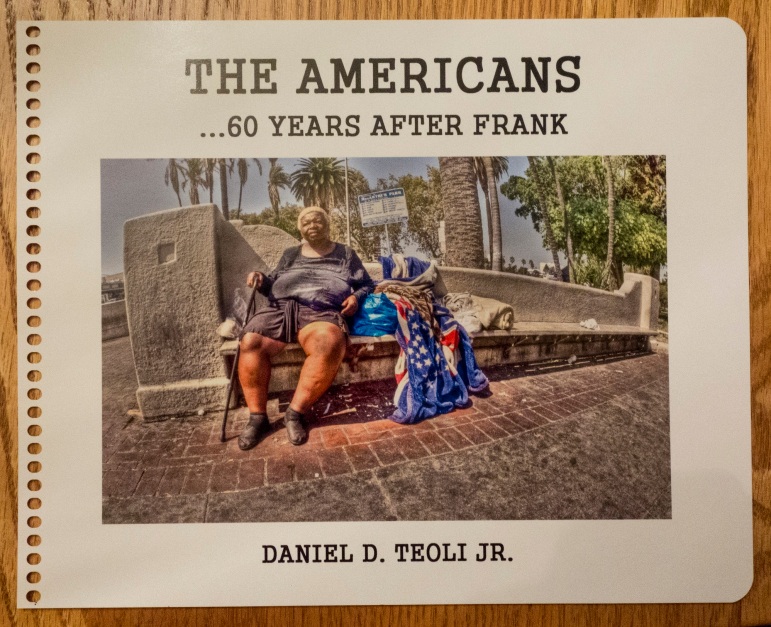 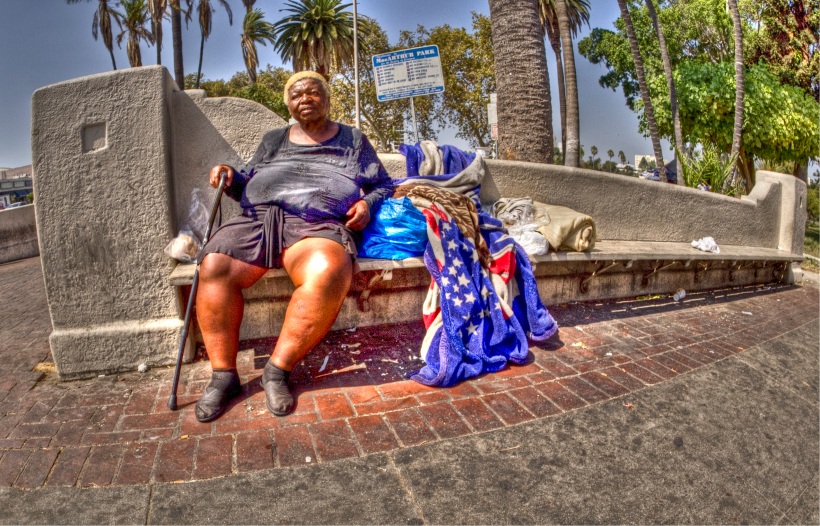 A short time after I shot this pix, (candid) this homeless lady died and the concrete bench was torn down. Documentary photography allowed me to archive her as well as honor her as the cover of my book The Americans…60 years after Frank.

A person wrote me about an ad I put in L.A.’s Craigslist advertising for a lesbian couple to be photographed for my artists’ book The Americans…60 years after Frank. They felt it didn’t it stay with the spirit of the original Americans from the 1950’s.

I think it’s great that you’re actually willing to pay people for their time. My only critique, is that I’m not sure what a staged photoshoot with a lesbian couple has to do with Robert Frank’s original series of candid photographs he took on his road trip across America. Will you be using the same gear he did (Leica film/50mm)? Are you planning a road trip? Will these be black and white? I don’t think you can successfully draw any parallels to one of the legendary street photographers iconic work with staged photographs of a specific, marginalized group of individuals. It might come off as exploitative. Just some food for thought.

Let me answer some questions concerning what The Americans…60 years after Frank is and is not.

I addressed some other critiques in an earlier post, so I wont go over them again.

I am not approaching the project with preconceived notions and limitations. Although I am copying the size and format of the original book as it is the best size for a spiral bound artists’ book. The book will be landscape format 8.5 x 9.5 inches.  An 8.5 x 11 book makes it too heavy, an 8 x 10 makes it too small. The size of the original 8.5 x 9.5 is the best size mix for the book. I also plan to stick with Franks original ‘portfolio style’ book layout.

No, I’m not slavishly trying to go to every spot Frank visited trying to recreate his trip…that is a project for the anal photog. (Sure, if I am in the neighborhood I will revisit a few of Frank’s haunts.) I will seek out a few of the original subjects Frank photographed in an effort to bring things up to date. This type of project can become a time capsule documenting a point in time. Frank’s original work may not have been looked at like time capsule when it came out, but as I look through The Americans, it is hard not to contrast how life was then as compared to now.

No, I am not doing one big roadtrip, I do small roadtrip’s of 3 to 5 days. You can waste a lot of time just driving around instead of pushing the button. A recent roundtrip to Hollywood from my LAX hotel took 3 + hours. When I got on location I shot for maybe 20 minutes.

My preference is to fly into a city and rent a car to drive around. Flying to a local and doing day trips helps out with the time wasting problem.  I’m in my 60’s and have a settled life with responsibilities, so I can’t just take off for a year to drive around…nor would I even want to, as it does not fit my personality. I an not looking for ‘snapshot aestheticism’ with my work. I may have a few of that genre in the book, but my main effort will be in taking focused and clean street photography or street portraits.

When Robert Frank shot The Americans he didn’t do it all in one trip. He took many side trips from his home base back east. When he got to L.A. he rented a house in Hollywood for 3 months, took day trips and worked local.  (See: Looking In: Robert Frank’s The Americans, Sarah Greenough 2009 )

But…does it really matter how the iconic photo was acquired? Whether it was made on a one year continuous voyage or shot just around the corner on lunch break like this one? (Posed)

Yes, I am using a Leica (digital) and I am also using an Oly M43, Pentax, Nikon, Sony, Canon, Epson RD1 and Fuji cams.

Yes, I will have BW in the book…just not ALL BW.

What would this next photo be in BW?

It would be useless. I don’t just look for ‘one way’ to document the world, I use many tools. If I was of the nature of ‘Hey, look at me…I only shoot BW,’ I’d be forcing things and end up ruining a photo just to satisfy my bloated ego. Then, I have done a disservice to freezing time in the best way possible…I’ve put my ego before doing the best job for the photo.

Ernst Hass on the subject…

“There are black and white snobs, as well as colour snobs. Because of their inability to use both well, they act on the defensive and create camps. We should never judge a photographer by what film he uses- only by how he uses it.”

When you dogmatically shoot BW only you can loose a lot of info. Here is a shot of a homeless tent encampment in the shadow of L.A.’s City Hall. It was taken a few blocks from where the famous statue that Frank shot now rests. The city has moved the statue from it’s original 1950’s location.

In the shadow of City Hall was shot on the fly, through my car windshield while driving, unframed.

All the specs I will discuss here are pro-forma, nothing is set in stone. As I develop the maquette I will refine my design of the book.  The Americans…60 years after Frank will have approximately 80 to 125 photos in it.  I may even make it a 2 volume set, I just don’t know right now. Maybe 70%-80% of the photos will be candid and the rest posed or landscapes.. About 15% of the book may be landscapes or photos with little or no people in it. I believe Frank’s book had 26% of the book as landscapes or with little or no people in the photo.

This very fact is often overlooked as it is commonly thought Frank’s book is 100% full of candid shots of people.

Everything Frank shot was not a candid…

Although I am not trying to copy exact ratios of genre used in the original Americans, I mention these stats to underscore that a photog must have ‘some’ artistic freedom to tell the story with whatever photos they feel are appropriate to use, whether that be posed, candid, landscape… 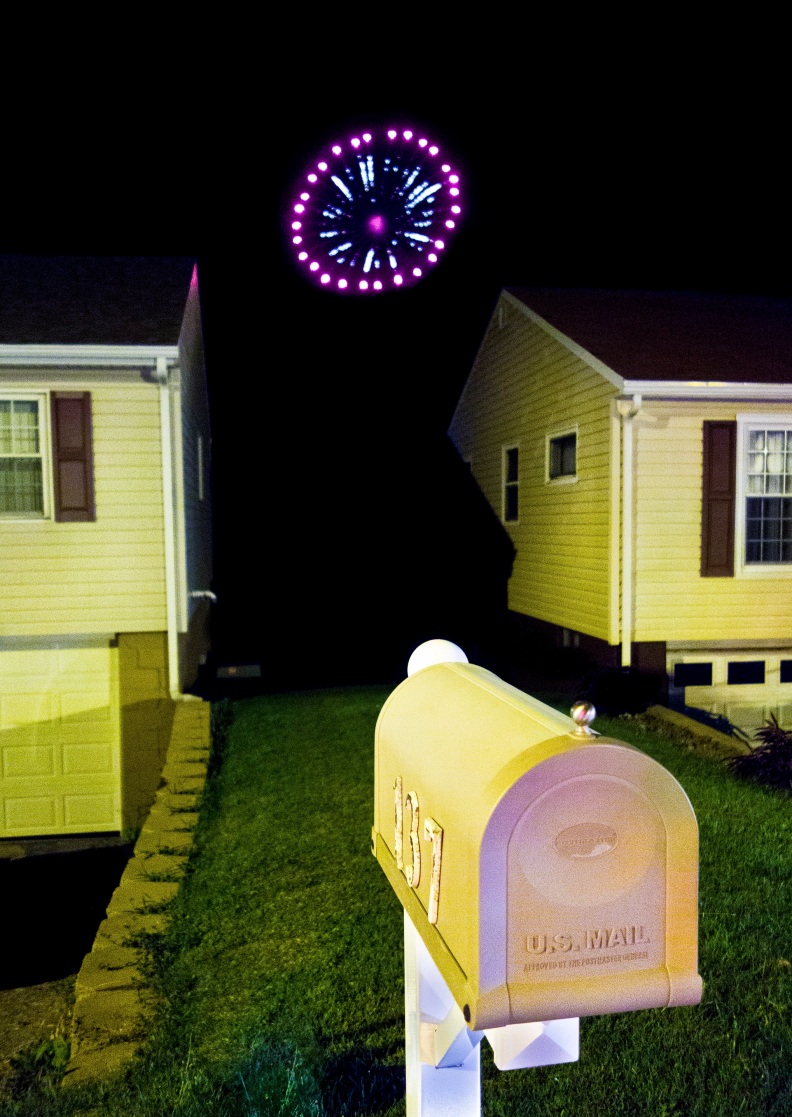 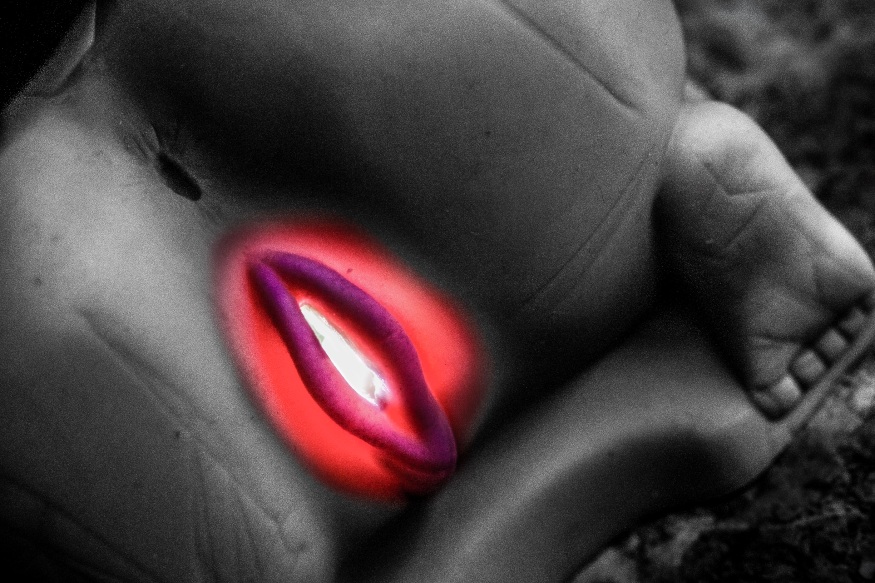 I have outstanding candid skills, so it would not be an issue for me filling up 10 books with all candid photos. I hold the world record for how close you can get shooting a candid with a digital rangefinder, M43 and DSLR camera. The candid photo above of the gal with the pink dog was shot a couple feet away with a Nikon DSLR. I have candid shots going down to a few inches from the subject. I routinely shoot such ‘in-your-face’ candid photos. 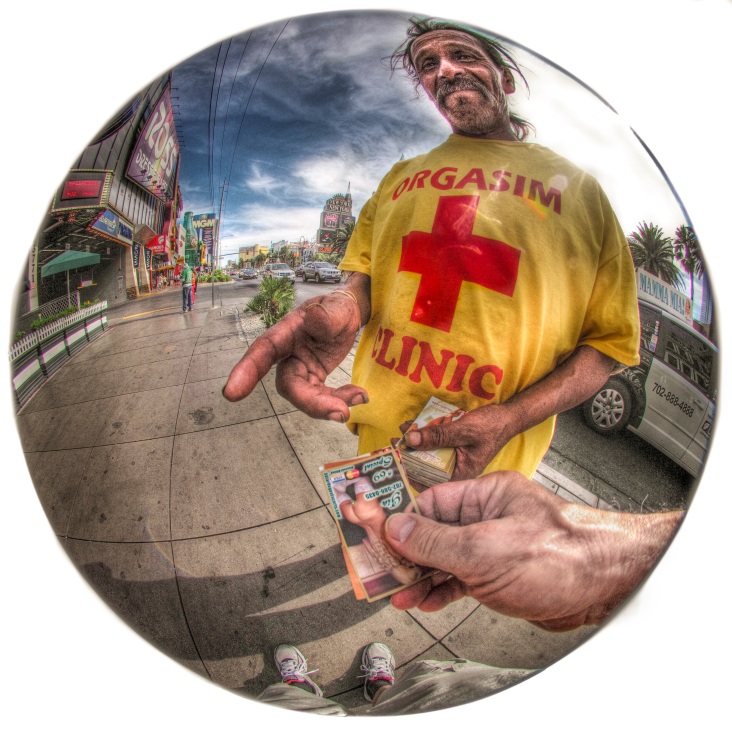 My goal with The Americans…60 years after Frank is to put the best photograph I can in the book. If candid shots work best, that is what I use. If posed photos are better, then why should I deny the posed photograph in favor of my ego? Some photos do better with a little posing – everything cannot be had, or at least perfected, as a candid.

I have a talent for shooting photos of people that look posed, but are in reality completely candid.  I may end up marking each photo description with a (C) or (P) to differentiate a candid versus posed photo. For instance, the next 4 photos are all 100% candid…they didn’t know I even shot them. 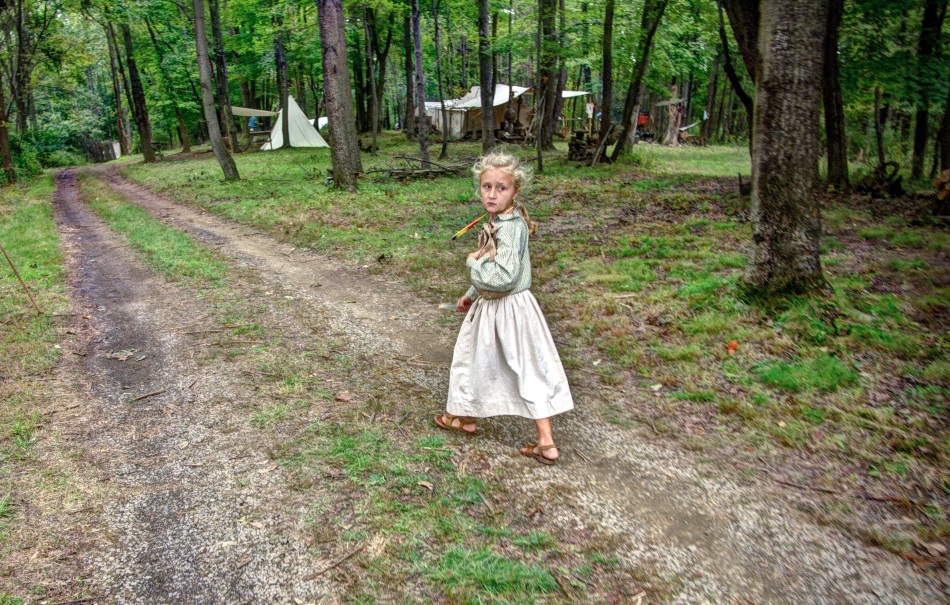 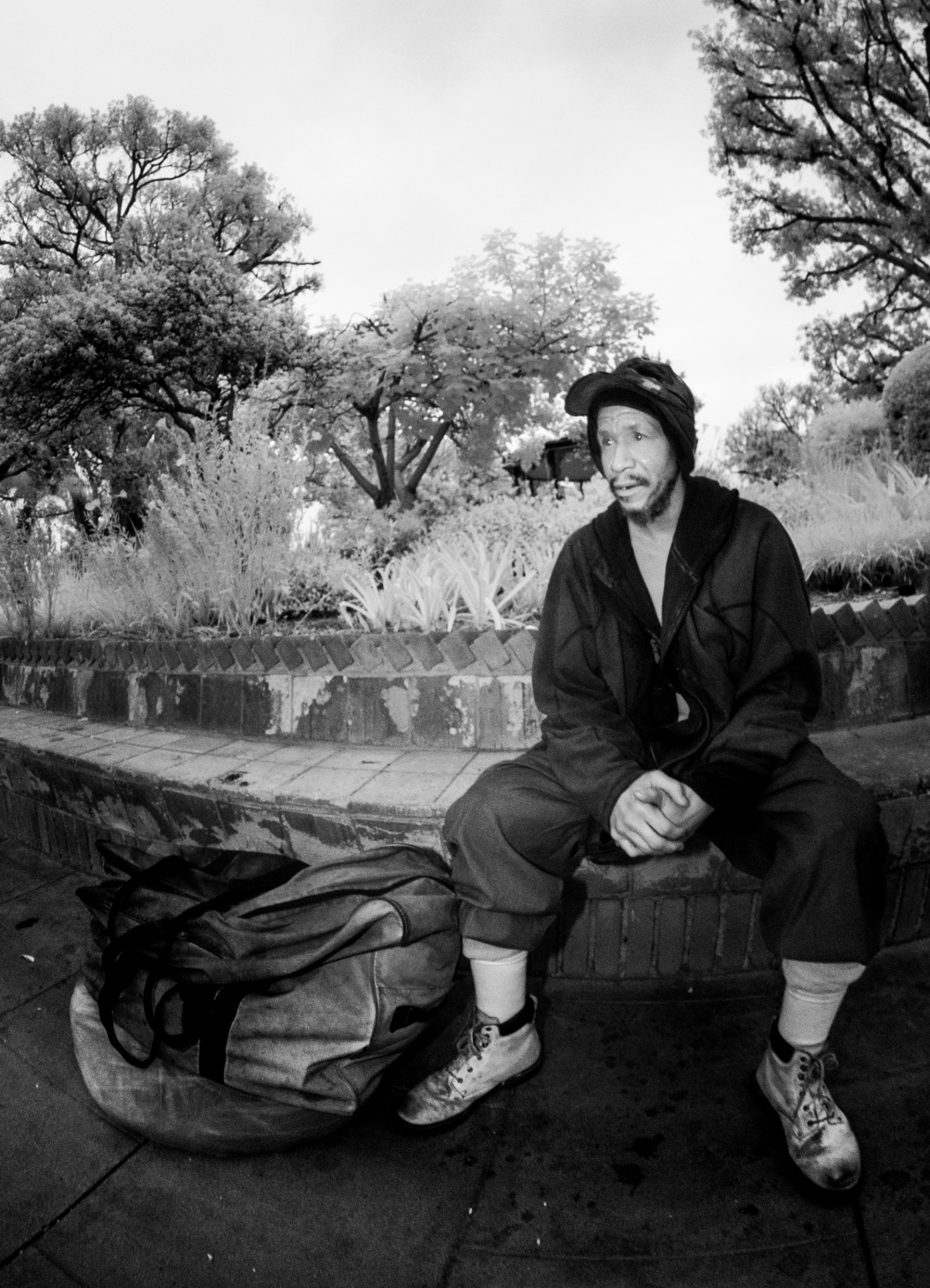 There is a big difference between posed documentary photos and staged, phony photos. If I hired models to pretend they were lesbi gals to model for the camera…that is staged, phony photography. All I am doing is paying an ‘access fee’ to document actual lesbians. I pay access fess all the time to get into events. I had to pay almost $200 for access to make this photo…(Candid) 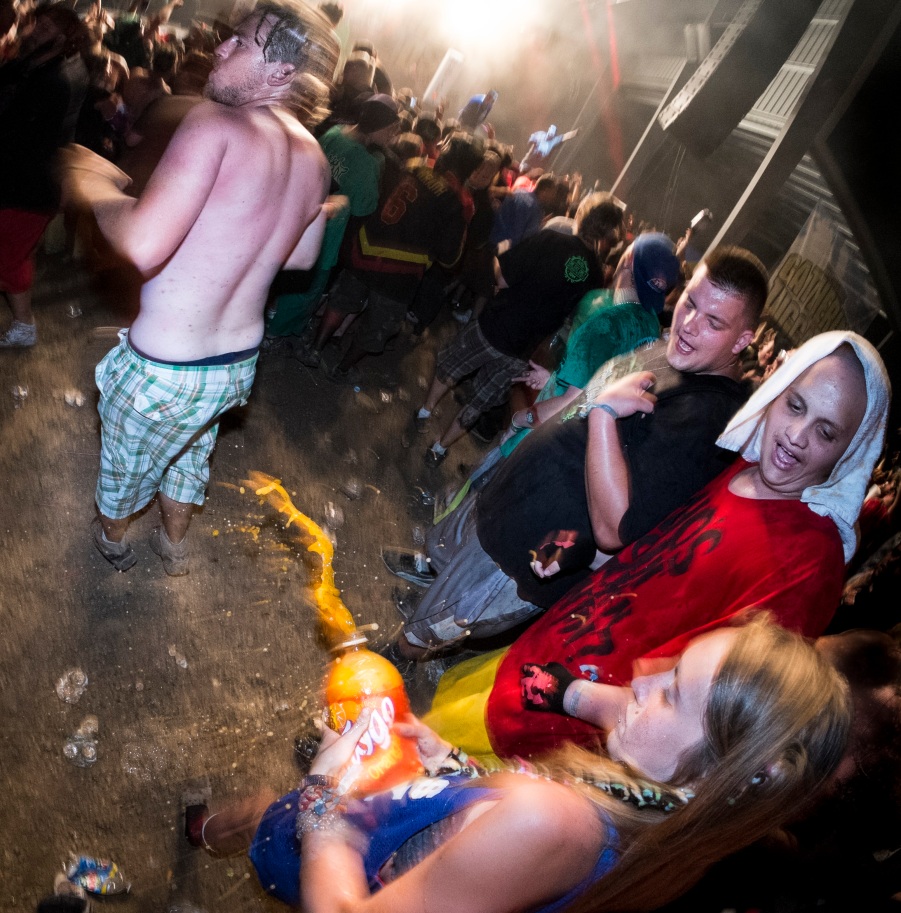 Paying an access fee has nothing to do as to whether a photo is real or phony. (Note: After running a few ads for 4 weeks, no lesbians were interested in being in my book or even replied to my ad…so I keep looking.)

Photogs paying for access is not some new idea I came up with. Eve Arnold paid $1000 ($7,700 in today’s $.) for access to shoot the Black Muslims in 1960. Just because she paid $ to a fixer does not mean the photos are phony or staged. Sure, some of her pix may be posed, some may be more of a candid nature, but without the access fee no button pushing would happen.

Some people hate candid photography and think permission should always be asked first. Others hate posed photos and think candid is the only way to go.  In reality, I am not trying to please either group by putting a mix of genre in it. As a documentarian, I must do what is best for the photo and not put popular opinion in control of things. Personally I prefer candid work over posed. But bottom line is…posed is always better than nothing.

A transwoman and her friend at a bar – Infrared flash photography. (Candid)

My early work as a social documentary photog was based on the credo ‘meet on the street…shoot at the home’ as my ultimate goal. That was how I produced a lot of iconic shots back in the 1970’s. 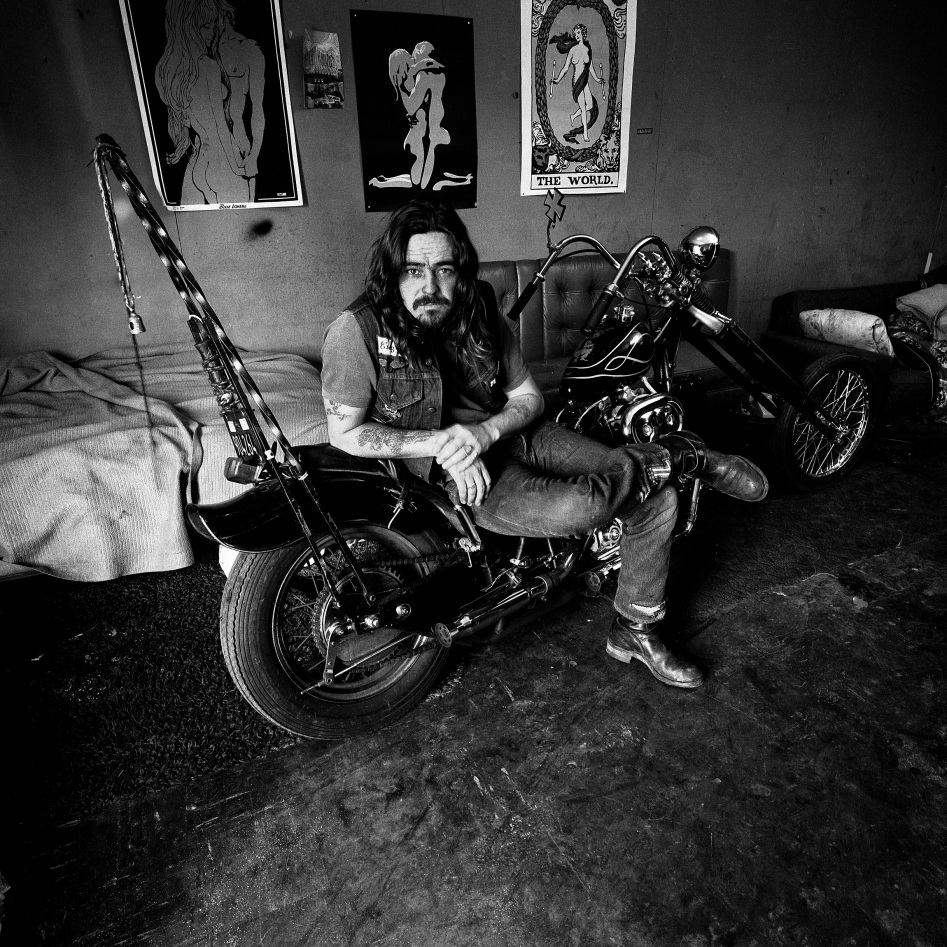 But, that was back in the 1970s when I was in my 20’s. Nowadays people are paranoid and wont go for it. They are also pretty much self-sufficient with their photo needs and don’t need me. (Well, self-sufficient as long as the electric is on and Wal-Mart has a good supply of $29 inkjet printers.) So, meet on the street…shoot at the home does not produce well for me any longer.

But, all is not lost with the lesbians….

I have many candid street shots of lesbi couples I can include in my book if need be. I was just looking to improve on what I already had. And in the big picture, my Americans book is not about lesbi gals or tanswowmen. Although I would like to put ‘one’ photo of each group in the book just to round it out. I felt any book taking stock of 2015 Americana should have at least one of each group represented in it.

As far as exploitative?

I am trying to include these groups in my book to honor them, nothing else. One lesbi couple wont make or break my book whether they are in it or not. I don’t do photography to make $…I do it for love of freezing time. Profit or loss never enters the picture with my work. The only time money questions come about are when I ask myself if I have enough money to fund a certain project. I’ve always subscribed to the credo – don’t shit where you eat. If I did photography for $, all my actions would be tainted by the profit motive and I could not be authentic to my work.

The book is scheduled for completion of principal photography by year end of 2016.

The Americans…60 years after Frank as well as Piercing Darkness are projects under joint consideration for a 2016 Guggenheim Fellowship.