Do you spend a lot of time worrying about sharpness?

so many threads on photography websites ( not just this one ) are all about sharpness, micro contrast, apparent sharpness modern sharp lenses, ancient sharp lenses, the best developer and technique for getting beautifully sharp negatives and equally sharp prints.

there has also been sort of a movement maybe it is anti-digggital, who knows, but it is about pictorialism, soft focus portraits, bokeh, landscapes that remind us of paintings, color slides or prints that are soft like pastels where sharpness, micro contrast and everything else i previously mentioned have absolutely nothing to do with the imagery ( or maybe they do ? )

do you spend a lot of time worrying about sharpness? do you stop down to a small aperture, use a tripod, low iso film, developers like xtol or dinafine or ?, printing masks to get beautiful sharp prints that have a (sometimes) extreme graphic quality to them, or do you just not worry about it .. sometimes

low iso, sometimes high, sometimes stand develop so you have mushy tones, use fstops that are larger apertures, shoot through ziplock bags, or whatever else it might take to give you the opposite of sharpness.

In a word, NO…I generally don’t worry about sharpness unless you are talking about making hi-res scans. Now, if I am shooting in terrible light and I am trying to make a decent available light shot, then yes, I may worry some about sharpness.

Although I am mainly digital now, I used to be an old film photog. I started with film in the late 60’s. I’ never went to any trouble to get extra sharp photos with film. I used D-76 and Microdol- X if I needed fine grain.  Print developer was generally Dektol. I used Plus-X, Tri-X and sometimes Panatomic-X. Then I graduated to Ilford’s films to save $. If my budget was tight I sometimes used Freestyle’s cheap bulk film. They repackaged expired movie film and sold it for next to nothing. 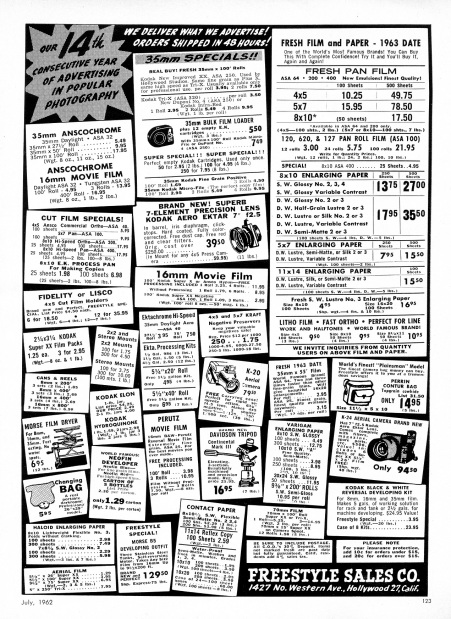 I didn’t have any interest in chemistry lab, so I didn’t have the need to test out every combination under the sun when it came to developing chemicals. If a film and developer worked good, that was fine for me. I was just interested in bringing home the iconic photo and not in playing mad scientist. 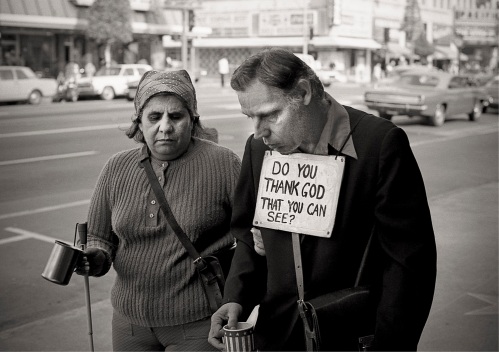 When I was a kid starting out I tried printing through panty hose stockings and using Vaseline on my lens. When the Vaseline got too messy I tried shooting through a piece of broken window that had some texture to it. But I grew out of all this artsy stuff once I found my niche in documentary photography.

Most of my old film street work had some grain to it. It never bothered me. If I was a studio film photog than it may have been different. My rough and tumble social documentary / street work was often times gritty  and somewhat cotrasty cause it required high ASA film and sometimes needed pushing. (ASA was what ISO as called back in the day.)

Makes Me Grateful for My Bed  Los Angeles 1971

I’m not a bokeh freak. You know the ones, they shoot boring as hell photos that have nothing going for them…except a blurry background. They always shoot wide open with some crazy $10,000 lens. And all they can do is keep screaming…LOOK AT MY BOKEH!  They don’t seem to realize that bokeh or any other photo treatment only goes so far. These treatments are generally meant to compliment the main subject and not to be the main subject.

I normally shoot mid-range aperture, although if the light calls for it and wide open is the only way – then it sometimes is wide open with me.  But I first try high ISO, then low shutter speed and finally wide open. Most lenses perform better if they are stopped down a little, so that is what I aim for. But shutter speed has to be in the area where I have a chance of getting a decently sharp shot. I don’t like out of focus shots and I don like shots ruined by camera movement. (Unless the blurry shot was sought out in the first place.)

If I am shooting a diffusion shot I like to glowing soft, but I seldom use diffusion. If I did want diffusion I’d use a soft focus lens. Nowadays they can do diffusion with the computer. As a doc photog I like things to be documented decently sharp. Although sometimes I may inject some art into the doc work and go for motion blur. If I do motion blur I like enough blur to give the illusion of movement and action, but not too much. You can go too far with making things blurry.

Here is one from Mary Ellen Mark…

A mess for technical skill, but still a wonderful photo even with it being so crapped up. MEM could have said she did it on purpose. She is not here to say. (Nor did she ever return my emails when I inquired while she was alive.)

Well, motion blur is not an exact science, so no one could dispute her. But I would have preferred it a little sharper for my work. (To make the final call we would have to see the sharper image next to the blurred up one. Otherwise it is all speculation on my part.)

I would have liked this shot a notch sharper, but it still works fine…

When I was in my teens in the 1970’s I went through a phase of trying to put sharpness first. I call it my Edward Weston / f/64 Group stage. Like an idiot I lugged around a 4 x5 in an aluminum case with heavy tripod, film holders and all the crap that goes along with it on the streets and alleys of downtown Los Angeles.

I wanted everything to be razor sharp. I was all about sharpness – that was where I put my pride. As I look back on the 4 x 5 images I produced…many of them were pretty boring. 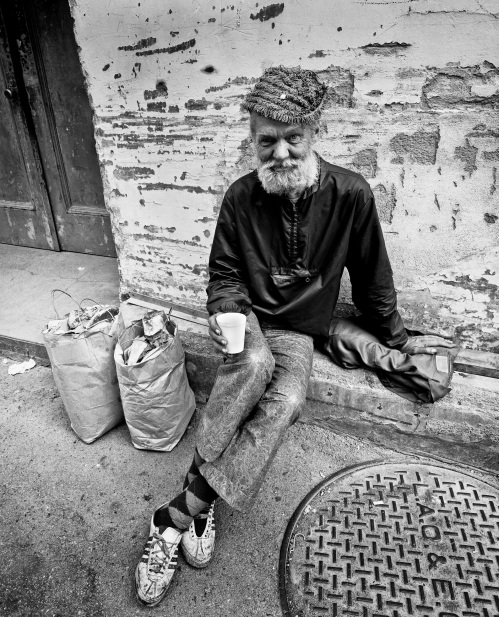 He had worked in the fashion industry in NYC before becoming homeless. He said his pants were made from old drapes. He folded up the jacket he is leaning on to keep the outside clean to give a “good appearance” to the world. He was homeless, but he still had dignity.

It was shot with a Toyo View 4 x 5 with Super Angulon 65mm (or was it a 75mm?) In any case, the Super Angulon lenses were beautiful little gems. I loved the wide angles back then and still do today…they are so all encompassing!

My view camera work eventually evolved to a pop-up focusing hood to replace the black focus cloth. I was just too vulnerable getting under the cloth in the areas I would shoot in. While the pop-up hood made a big difference, it still did not make the view camera a viable option for my style of shooting.

After a year of shooting 4 X 5, I started thinking about giving up on the view camera and began testing the waters with 6 x 6. And as it turned out, I was much happier shooting medium format instead of trying to walk down the streets and alleys with all that garbage weighing me down…it was just too crazy.

The day I stopped ‘forcing’ things, by being hell-bent on using a large format camera that did not fit my needs, just to satsify an ego problem, was a day of enlightenment for me. But as the saying goes…sometimes you don’t know you have gone too far until you do. I’m just glad I didn’t need to take my delusions to a 8 x 10 or 11 x 14 view camera or wet plates to figure that out!

Selection from The American’s: 60 years after Frank artist’s book

Here is the bottom line…if you feel bad your shot is too soft, then marinate it a la’ Eric Kim style…maybe it will grow on you!

From Gender Benders from the 1970’s artist’s book