Note: If any photo looks fuzzy click on it to see if there is a hi-res version. 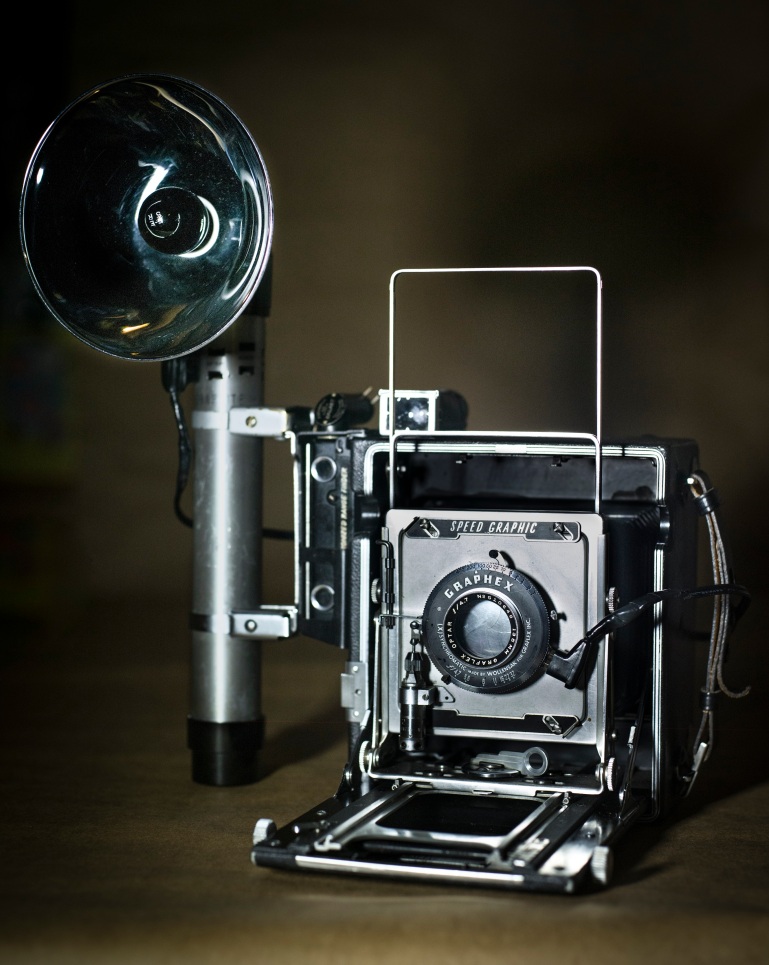 The Speed Graphic was a mainstay of Weegee. Loaded with 3 zinc ‘D’ batteries and a film holder, it weighs nearly 9 pounds!

The camera fondlers are spoiled nowadays. They complain their cameras that weigh a pound are too heavy. The old press photogs were real he-men lugging this thing around all day.

Here is some of their work with IR flash…

(You got to love those moments that pleasure the gals so much it makes their toes curl! GD…can there possibly be ANY more pleasurable work in this world than making women’s toes curl and crack!)

Lovers at the Palace Theatre – Weegee

There are many variations of this photo showing Weegee took various poses of the couple. The dates for this shot vary all over the place…1940, 1943 and 1945. Weegee said he prided himself in reality based photography, but he was not getting what his client wanted for movie theatre shots. So Weegee staged some of the infrared movie theatre shots….”helping realism along” as he wrote in his autobiography.

Weegee talks about his infrared flash photography on pages 117-118 of his book  Weegee by Weegee. He said he picked up a female model with a “peek-a-boo dress” and a male model from the Art Students’ League. He brought them to a theatre and told them “Don’t look at the camera and don’t laugh. Just make love.” .

Weegee reenacting how he did his infrared flash theatre photography. He disguised himself as an ice cream vendor.

Here is another version…

Weegee’s account of his infrared work is confusing. Many of Weegee’s early infrared photos date from the early 1940’s. He would have used a Speed Graphic 4 x 5 press camera in that era. In his autobiography he said he hid his camera in the ice cream tray, which sounds more like the 1950’s when he used small format cameras. It is pretty hard to hide a press camera.

Well, I can’t hold Weegee’s staged lovers against him. I’ve been in a number of theatres and have not seen any love scenes as yet. I keep looking. Until then let me offer Weegee this IR theatre homage… 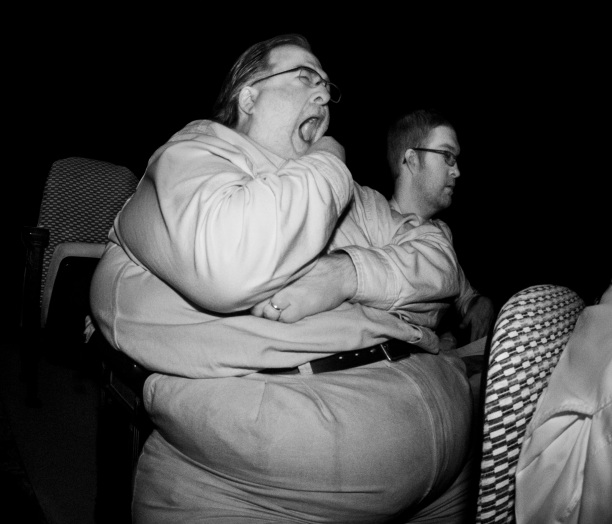 The next photo is by Yoshiyuki…from his project ‘The Park’

Yoshiyuki’s project centered around taking IR flash photos at 3 parks in Japan (Chuo, Yoyogi, and Aoyama parks) where people would go to have sex (both hetero and homo) and voyeurs would stay in the shadows to watch them. (Sometimes the voyeurs would see how far they could push things and try to sneak into the action!)

In a 1979 interview Yoshiyuki said that just as he started to test Toshiba infrared flashbulbs, they were discontinued. Yoshiyuki replaced the discontinued bulbs with Kodak (infrared) flashbulbs.

A quote from the 1979 interview done by Nobuyoshi Araki and Kohei Yoshiyuki:

“I found out that Toshiba made flashbulbs- infrared flashbulbs. Before I had a chance to use  more than a few of them, they were discontinued. Then I looked around for filters, and ended up using two tricolor separation filters.  After a while I heard that Kodak had some flashbulbs, so I used them. At that time infrared flash units didn’t exist. Sunpak came out with them after I took these pictures.”

Bill’s reply:  “Kodak did not make bulbs, if anything they may have had some private labeled by others but not made by them.”

Chuck Baker, another historian and collector concurred stating;  “As far as I know Kodak did not make their own flashbulbs.”

I polled the Flashbulb Collectors Page, a Yahoo Group, on this subject. Unanimous consensus was Kodak never made any flashbulbs whether they be infrared or visible light.

Private label or not, nothing ever shows up in the historical record or on the second-hand market for Kodak flashbulbs either in the visible light spectrum or infrared. While it is possible that the Japanese had access to products not available in the USA, it is only conjecture.

I like Yoshiyuki, so let me just borrow a quote from his interview to finish things up and say…”I better not say any more.” You can draw your own conclusions 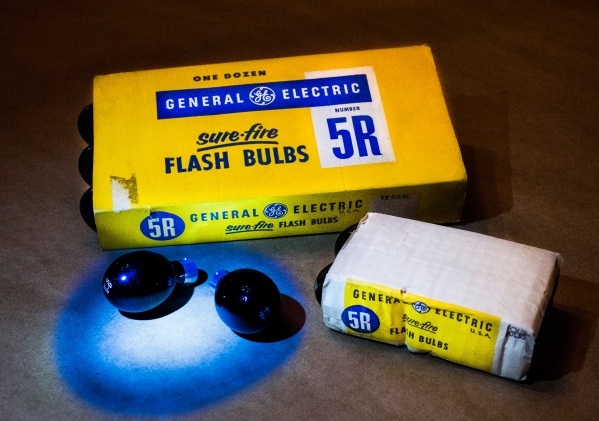 Infrared flash photography was developed during WWII as a means of taking photos in complete darkness also known as ‘blackout.’ I don’t know how much the 5R’s cost in the early 1940’s when they were first commercially marketed, but a package from the 1960’s was priced at $3 a dozen.

A trade announcement in the May 1949 edition of Popular Photography said Sterling Howard Corp of N.Y.C. was selling infrared flashbulb coating kits to turn white light flashbulbs into infrared flashbulbs. The list price for the gelatin &  dye kit was $4.75.

This document was taken from Photography: Naval Training Course, Vol. 1, NAVPERS 10371-A, prepared by Bureau of Navy Personnel, 1951.

A flash lamp pierces darkness about the way a 16- inch gun salvo rends silence. The ordinary flash lamp, that is. There’s one which is decidedly “un ordinary.” A photographer takes a flash picture in pitch darkness. Only a few feet away there is not the slightest hint of it. But what about the flash? There wasn’t any. A flash picture with no flash? Well, for all practical purposes-yes.

Actually there was a flash. But it was made up almost entirely of infrared light, which is invisible. Yet the lamp illuminated the subject quite enough for a clear picture. This is infrared flash photography or “blackout” photography. The special flash bulb is coated with a Lacquer which transmits a maximum of infrared rays while holding back nearly all the visible rays.

It must be used only with infrared film and in total or nearly total darkness. Slow shutter speed (1/25 to 1/50) and wide lens opening (f/4 to f/8) are required. The phenomenon of blackout photography will work only at very short distances-usually 10 to 15 feet. But at close quarters it will produce a surprisingly satisfactory photographic record.

This procedure might have numerous military uses. An example would be in taking a vital picture when a brilliant glare of white light would tip off your presence to the enemy. There are also less ominous circumstances which would make the use of the conventional flash impractical or impossible.

An early blackout infrared flash photo from 1945 of Kodak’s Aero Pan film spooling operation. A single GE 22R infrared flashbulb was suspended above each operator for illumination. Photographed with a 4 x 5 camera with infrared film.

In 1974 Sunpak introduced the first commercial infrared strobe. The Nocto 400. 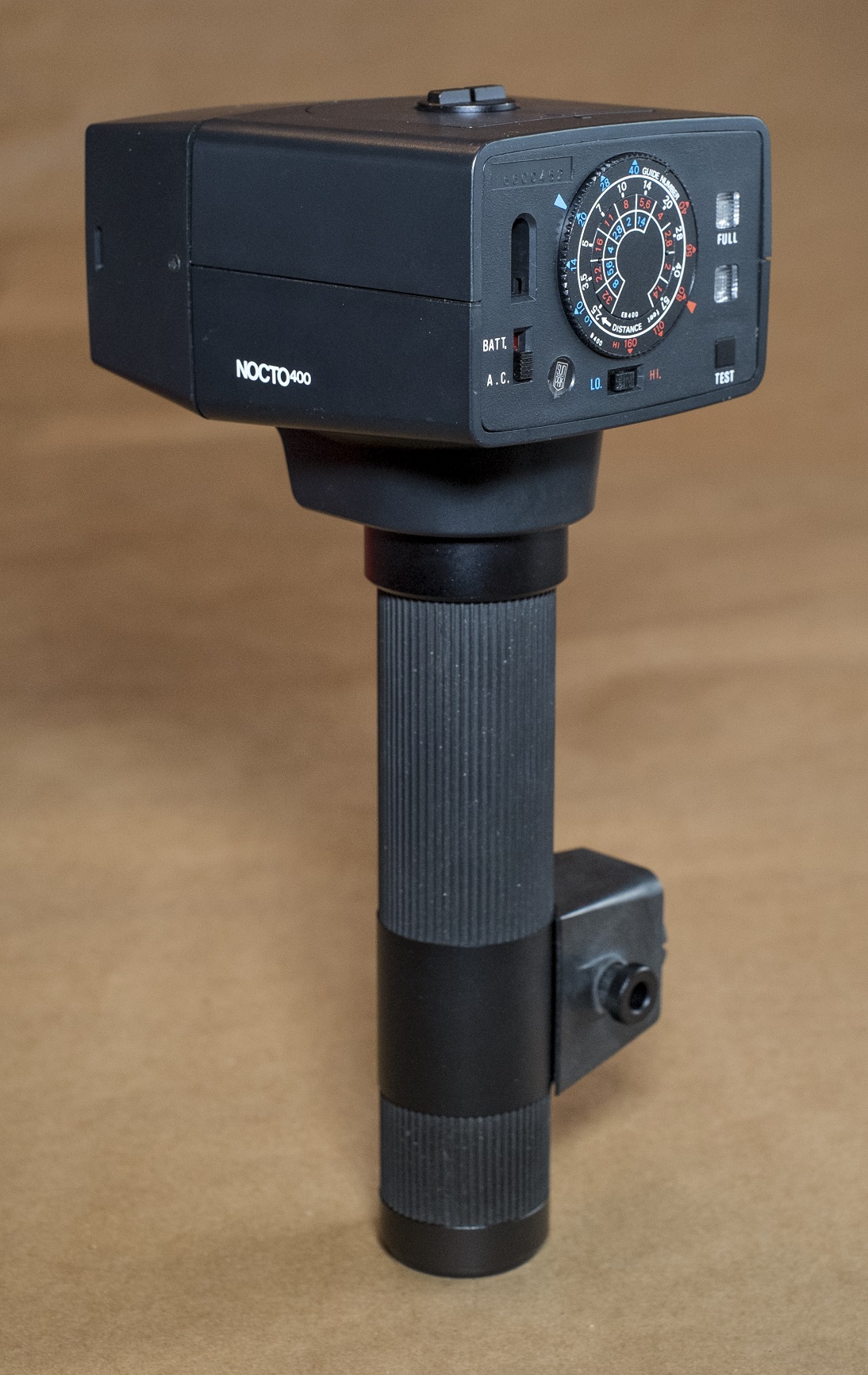 The Nocto 400 was a revolutionary strobe as it was the first and only commercially produced dedicated infrared flash ever made. It weighed about 886 grams without batteries.

It’s downfall was it produced a visible bright reddish / orange glow when it fired. It had a high and low setting and ran off of A.C. or  4 ‘C’ batteries. The low setting produced a slightly lower glow that was only visible if you looked directly at the head. The high setting produced a visible orange glow that would reflect off the object if it was within a few feet and had a reflective nature. The recycle time was 7 seconds on high and 1.5 seconds on low powered by the AC cord.  The guide number calculator had a range of 57 feet for the high setting.

A few years later Sunpak introduced the model 622 which incorporated interchangeable heads – one head being a dedicated infrared flash head. 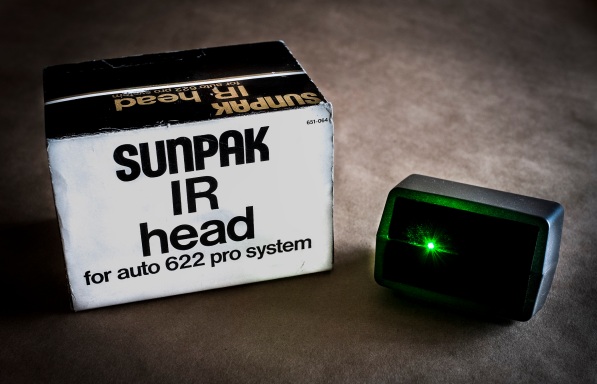 I took apart a Sunpak 622 IR head and sure enough there are two filters as ‘t6b9p’ reported.

The spec sheet lists the following information for the 622 Pro IR head:

The beauty of the Sunpak was its systemized design that allowed rapid change of 7 dedicated strobe heads: 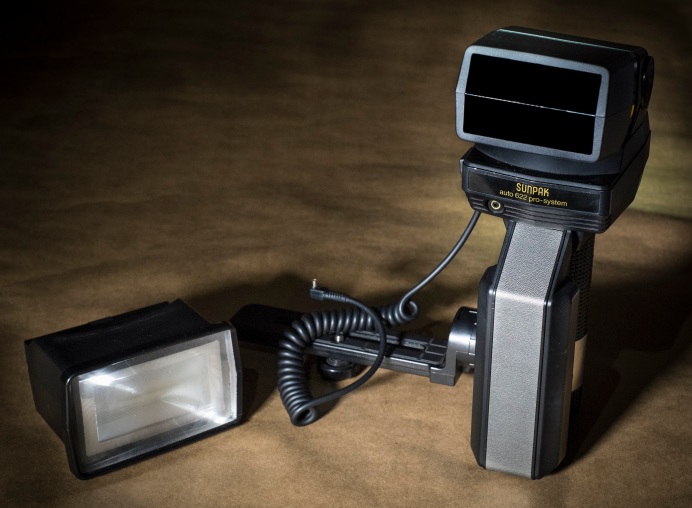 A vintage 622 with IR head installed and the zoom head.

The Sunpak 622 was a monster to lug around. While the head is light, the weight of the entire flash unit is very heavy at 1109 grams without batteries. Recycle time with 4 alkaline batteries was 12 seconds on full power and almost instantaneous at low power.

This is a very powerful strobe that is said to be roughly 250 watt seconds. Although the flash head still emits a reddish glow it seems a little less than the Nocto 400 emitted. The dual filter array does a good job in keeping this strobe stealthy. 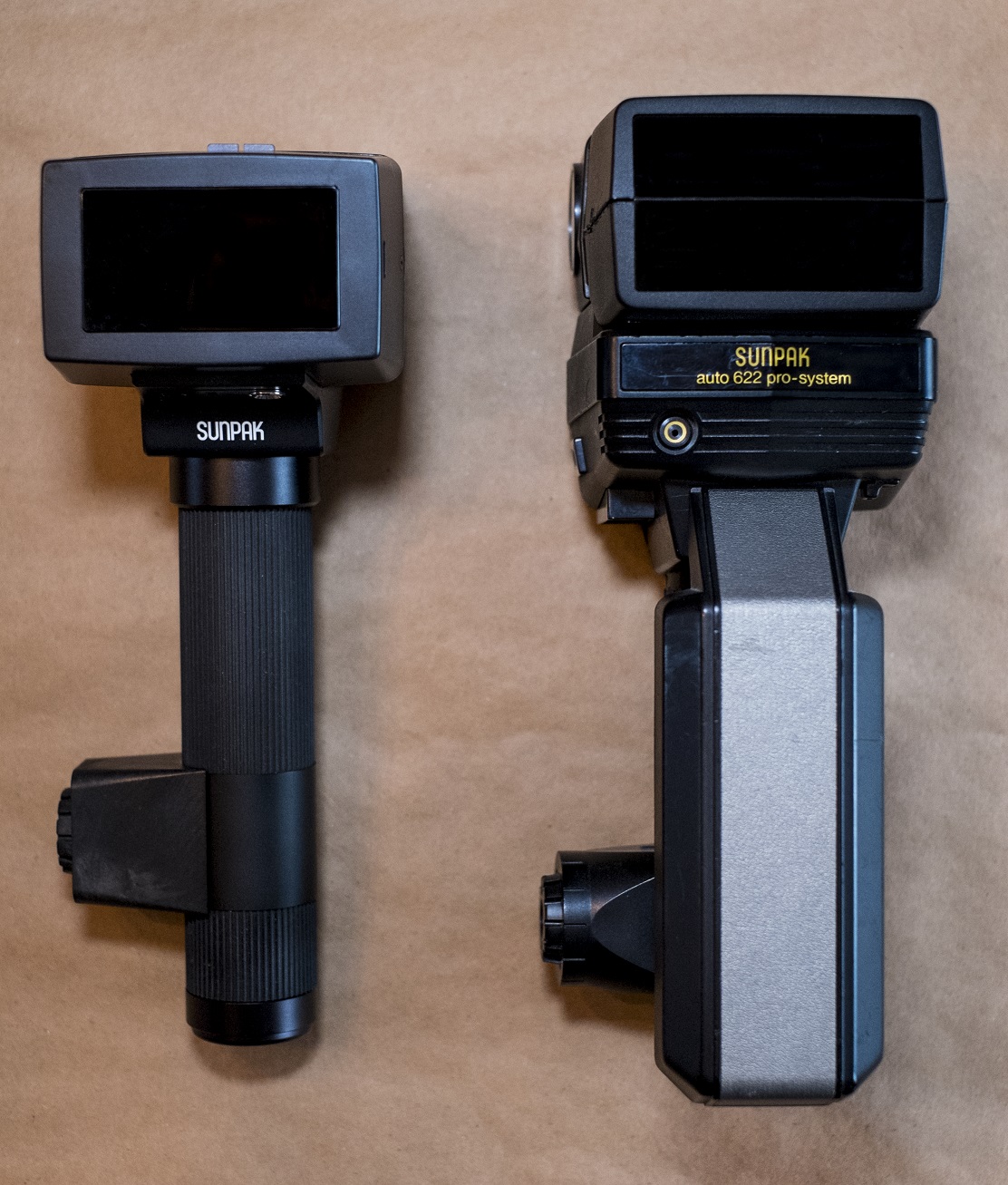 If you would like to use one of these vintage film era IR strobes on your digital cam you will need Safe-Sync adapter.

In the 2000’s third party cottage industries came out with IR flash adapters that slid over small, modern strobes and commercial strobes modified for dedicated IR use.

An interesting aspect of infrared flash photography, is how it highlights the veins of the body. Dr. Lou Gibson did a number of experiments in this area.

A little history on infrared flash photography was taken in part from my forthcoming artist’s books:

Ikko Kagari also did some work with IR flash in his project ‘Crowded Train’ on the practice of ‘chikan’ (groping women on the train or subway) in Japan. I think it is from the 1980’s but not sure. And maybe book title is wrong. Very underground and not easy to find the right info as it varies from source to source. 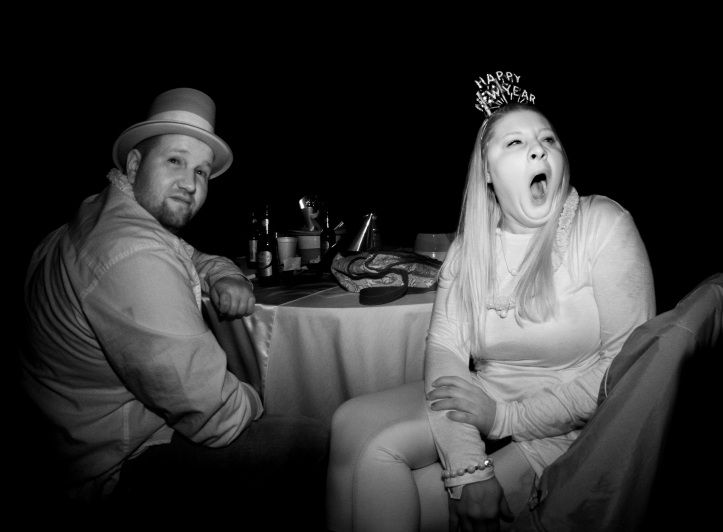