Don McCullin does not trust digital photos and hates the hideous, freaked out HDR.

If we are talking about news photos, I see no problem in cleaning up a photo if the cleanup does not have a material  change in the honesty of the photo. Whether an empty water bottle or cigarette butt is in a photo or not, it most likely wont have a material impact on the honesty of the photo. If the photo is a crime scene photo then keep it 100 %. If it is an art photo,  do as you like.

Regarding McCullin’s hate for freaked out HDR claiming it is hideuos?

Well McCullin is free to have his pet likes and dislikes. Don in an old fossil. (I say that with the most respect and love for Don.) It is too hard for him to change it seems. Mary Ellen Mark was similar, she had a dislike for digital and was a film buff. I was in my 60’s when I shot most of the pix in this article. I just move on with the times and don’t suffer from rigidity…at least with my trigger finger.

You can’t argue taste. Personally I love hideous HDR Don! The photog has a number of tools they use to garner attention for their photos Don. Whether it be removing color to make it BW, cropping, selective color, high contrast, grain, lighting, bokeh, diffusion, motion blur, distortion, perspective, etc. The hideous color photo did its job Don…it got you to take notice for sure.

With fast shooting or even slow shooting, we are not always able to get composition right in the camera. Cropping and post processing can make or break a photo. In my case, almost all my photos are cropped ( a lot or a little) and the vast majority of them can be improved with post processing.

I’m not going to show you the ‘before version’ looked like for the Man with Cock Ring. It is just too bad and embarrassing. Cartier-Bresson used to do the same thing when he started out. He would cut the keepers from the 35mm neg strips and trash the rest. Later on I guess he outgrew that habit. Well, he didn’t have to deal with the digital age. Nowadays everything you put online can come back to haunt you. I don’t want the before version associated with my name.

So, whether it is your crapper or mine, keep this in mind…

Now, I’m sure all the photo forum camera fondler’s out there will laugh at me and say how they would have got it right in-camera. Well, maybe they would have….but I doubt it.  I was behind a group of gawking women and had my cam on a monopod that I used to reach in front of most of the crowd. (There were still a couple people in the photo I could not get around, but PP and cropping fixed it.) He pulled it up and put it down. If you blinked a couple of times you missed it. The original was shot at about 45 degrees off kilter and off center.

Suffice it to say, none of that matters a GD thing to the photo…does it. You will never see the original, nor would you have known if I didn’t tell you. Oh…this was a one shot wonder as well!

So, as it was, the original was trash. I did my best with cropping and post processing and it became a fine shot. Only the pretentious snob and egomaniac will let a great shot die because they may have to crop it a little or a lot.

I remember one guy fitting the pretentious bill on an old photo forum I was on. He said…

“If a photo has to be cropped, it was not meant to be taken.”

Don’t ever let small minded critics ruin a great photo of yours by you accepting their limited worldview. In the end, the only thing that counts IS the iconic photo. Get it any way you can! 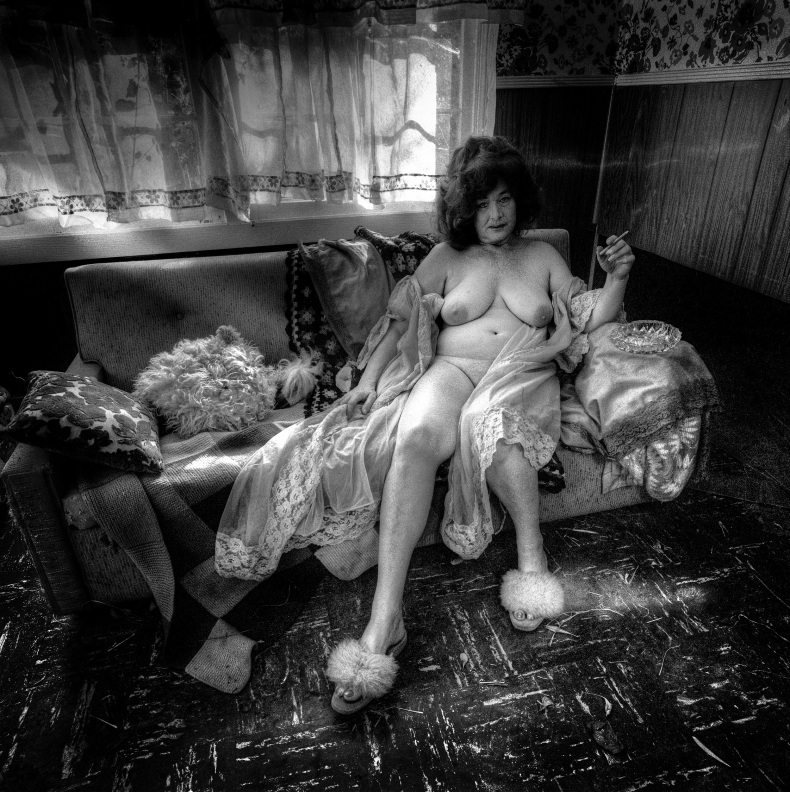 This shows what 2.5 hours of Lightroom can do for a pix. I shot it in the early 1970’s when I was 19 or 20 in Hollywood, CA. The only light was the window. It never amounted to much from my wet print days. Digital revealed what was hiding in the neg all those years.

Here is an example of push processing an image. The gal was pushed 2 to 2.5 stops. The guys head was pushed 4 to 4.5 stops. Normally a photo pushed this much would be trash for me. But, shooting in Amsterdam’s Red Light District is forbidden, so I have to make due with a wider net of acceptable quality under the circumstances.

Infrared flash photos shot in complete darkness usually require a lot of work. The photog can’t see what they are shooting very well. If your doing candid infrared flash photography, you don’t make a big deal over framing. You can’t because many times you can’t see the subject in the viewfinder, so cropping can help. Also there is extensive post processing needed for infrared work. It is developed or brought up, like we did in the old wet darkroom…just no chemicals. 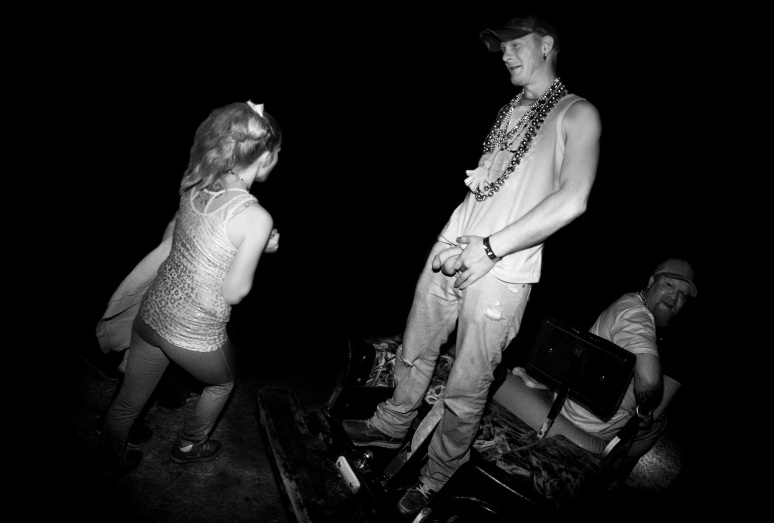 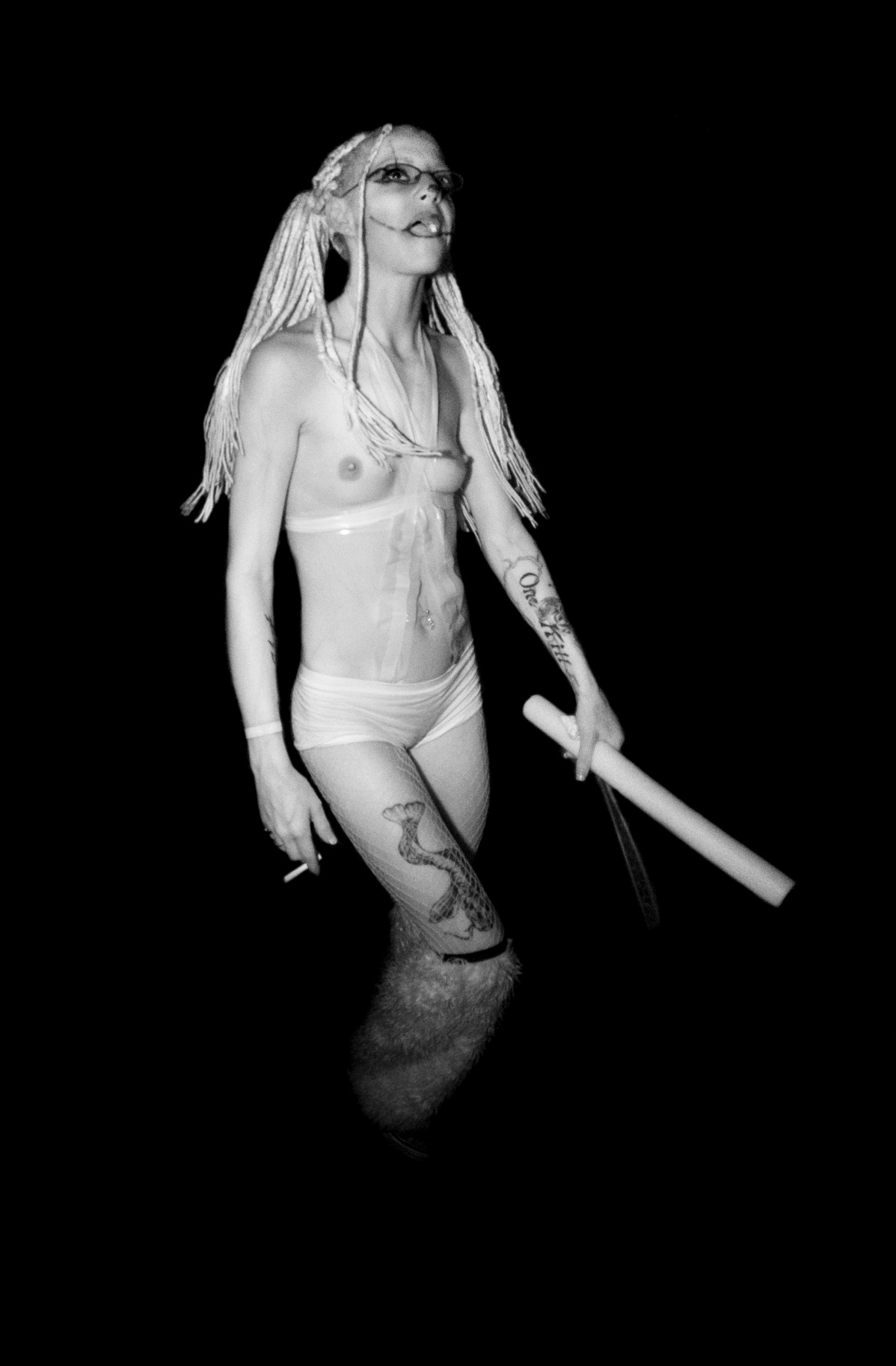 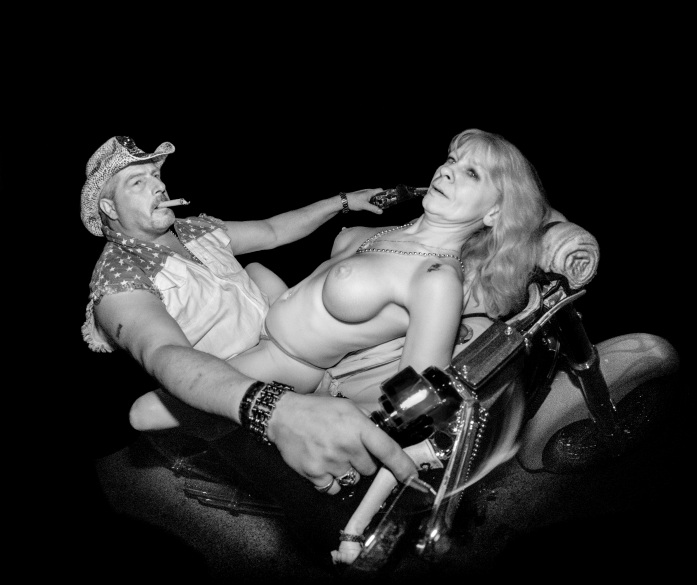 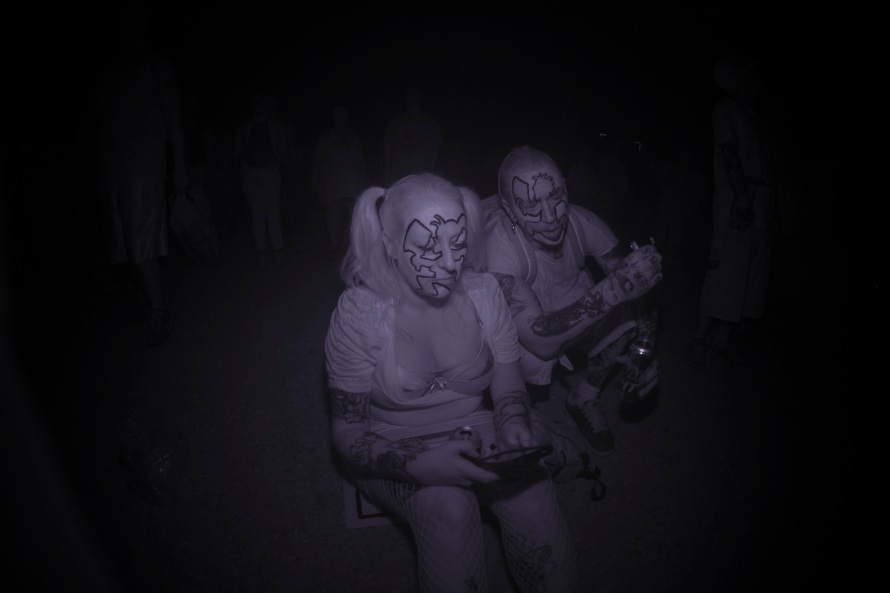 Above: Digital infrared photo right out of the camera with no post processing.

When I shot Captain of Wall Street 9007 all I had for light was the window and one bare bulb on the ceiling. While this photo did not need cropping, it did require lots of post processing to make it doable.

Here is a case where I was not comfortable putting a pix out there of the American Nazi with her face out. So, PP helped transform this shot into the iconic Hakenkreuz in a Dress.

While I didn’t have to crop this pix, it required lots of PP – this is the 21st version. (Not including the border shot with text.) Shooting into the sun made it a hard one to develop. That is how it usually goes for candid street work. You can’t pick and choose your lighting. (Unless your one of the modern day ‘street posers’ that try to pass off staged work as candid street photography.)

BTW…‘Order Women like Pizza’ is the world record for how close you can get shooting a candid with a digital rangefinder….less than a foot!. (I got em going down to 2 or 3 inches from the subject as well, but, I liked this one best.)

PP let me get a little artistic with this one. In the old days it would have been very expensive to do this with dye transfer strip ins.

With digital, even an old film photog like me, with very basic computer skills, can get creative!

Now, whether you like the effects or not does not matter to me. Just as your photography should not be done with the end result of pleasing me. Photogs can be a pretentious bunch, they think the world revolves around their own taste in pix. If your not working for a client, then all that matters is that your OWN photography please YOU.

Photos use in this post are from the following limited edition artists’ books by Daniel D. Teoli Jr.

Portfolio; Peering into the World of 1970’s Hollywood and L.A.

180: The Circular Fisheye at large!

The Americans: 60 years after Frank

The Secrets of Candid Photography